This article from Britain is pretty frank in its assessment of current US politics; much more so than my rambling posting yesterday. Pretty strong words for a country not used to 'leading the world', eh? I'm still a proud American, but we need to get back on track--and fast!
Posted by Bo Wagner at 12:32 PM No comments:

Death to the USA?


It seems that the US is under attack on many fronts. One of which is from within, as we battle over (fill in the blank, or just say 'everything') in a highly partisan fashion, as if party 'loyalty' (read: special interest groups and lobbyists, or just say MONEY) is more important than our country. BOTH parties are guilty and I am ashamed at our government. PERIOD. It makes me want to go read Vince Flynn's Term Limits again! We are also under attack from terrorists here (arrests in NYC and Colorado?) and abroad. Regardless of that fact, and how G-20 wants to further emasculate our country, I hear today that the UN wants us to step it up re: climate change. Likewise, President Obama pledges that the US will do its part to reduce greenhouse gases and emissions. I actually agree with him in principle. While I do think Al Gore is an alarmist, self-serving person (with tainted 'facts' to support his beliefs), climate change is something for us to deal with. While I don't buy into all the arguments (and vehemently argue that 'cap and trade' is the worlds largest shell game) I feel that we CAN do so much more to work on reducing emissions.

Today's rant? The UN wants us to curb emissions--the main emissions are from our coal-fired plants. I know that most of our utilities are entrenched with this technology. Likewise, the coal 'scrubbers' to clean the emissions are incredibly expensive. Who pays for that? Not only do the utility companies, but WE pay for it as well. However, the utilities have to 'ask' to raise rates and the PSC won't always allow it, so the utilities continue to put off implementing scrubbers as long as possible; can't say I blame them!

What is the white horse for utilities? Windmills are cool (check out the photo from Maui, Hawaii) 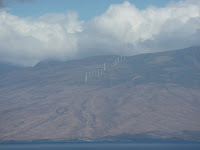 but not all areas are conducive to generating the power necessary to run our utilities; likewise, how do you get the power to the people (sorry, easiest phrase to use!). The best option may be nuclear power. Yep, I said the n-word (not THAT n-word, but it's almost as offensive to enviromentalists!). I acknowledge that the spent fuel is an issue, but nuclear is a great alternative; an alternative that finds great success throughout the world--in countries without as much regulation. If we can run a fleet of nuclear powered submarines, why can't we figure out how to build a 'standardized' nuclear power plant? Figure out an easily duplicated design and BUILD IT. Clean power; ask the French! 3 Mile Island was a mistake as was Chernobyl. We are one of the most high-tech countries in the world--surely we can build a new plant that is safe? Make that a priority, Mr. President; that will be a great legacy for the future of our country!
Posted by Bo Wagner at 10:57 AM No comments:

Economic indicators missed their mark today by a tenth. Expectations for the index to rise .7 percent were off resulting in a smaller rise of .6%. While the markets are currently on 'sell' mode this morning since the numbers were off, I do think we need to focus on the fact that this is still a POSITIVE number, albeit off the pace expected. So we've had five months of rising indicators but unemployment still lingers. Yes, temp firms are seeing some increased business but not for temp to PERM jobs as of yet. Here in ATL, economists feel that job recovery is coming in 2010 but views differ on the amounts of job increases--but most feel that it may be later in 2010 than earlier so we're definitely not out of the woods yet.

What about real estate? Interest rates are still currently low, but the expiring $8000 tax credit could cause big problems AFTER November 30th as the tax credit incentive disappears. Senator Isaakson is fighting for an extension; hopefully he will be successful (insert rant about this credit being only for 1st-time buyers here).

Don't forget that we still have a lot of unsold inventory, including a lot of partially-built subdivisions. Factor in all the foreclosures in the market and there are still inventory concerns. If you wanted to buy, you have a golden opportunity. If you STILL rent you are an idiot (unless you have a really good reason to have temporary housing--if not, as you throw away your rent each month, remember that you're an idiot :) Keep the faith; like our rain, this can't last forever! Happy Monday! Bo
Posted by Bo Wagner at 11:13 AM No comments: