Wow, guess that "R" word is coming closer... like a freight train more or less. In case you missed it, the Fed lowered short-term rates by an unprecedented 3/4 point this morning. Not only that, they did it well before their scheduled meeting on 1/30 (where most expected that they'd drop it a half point anyway). So what does this mean? I'd say they are trying to stop the bleeding and give Wall Street some good news (esp. since the Dow 'futures' was showing about a 500-600 point drop--BEFORE the markets opened! So I guess that's why Ben and the boys did an Emeril and said BAM! How 'bout those rates? Again, we'll see what happens now!
Posted by Bo Wagner at 9:11 AM No comments:

Solution to our ills? Shop and Spend! 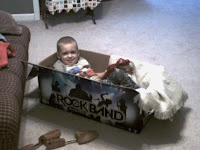 Did you "shop 'til you drop" this past Christmas/Holiday season? Evidently not enough as our 'guvment' is going to have to give us money to go spend! Why? To rev up our economy of course! Apparently there will be a news conference today in order to discuss an "Economic Stimulus" package. What does that mean? "Rebates". Huh? Well, remember what you have to play with every April 15th? Yep, now it's time for some fun wealth distribution, only this time hopefully we all share in the fun! "Putting money into the hands of households and firms that would spend it in the near term" is a priority, Bernanke told a House committee. So is this going to be enough to keep us out of a recession? I sure hope so (especially for a cost of $100+ Billion)! I know my family did its' part as we bought plenty of toys and video games for Christmas (as "modeled" by grandson Gavin and his "Rock Band" box--no, the game was not for him, but as is the norm, he had more fun playing in this box than with some of his toys. Not only that, he actually SLEPT in said box. Don't tell DFACS!). So what else will rev up the economy? Spend spend spend! It is expected that the Fed will lower the Fed Funds rate by another .50% on the 31st which will result in a Prime Rate of 6.75%. Again, this really does nothing for long-term mortgage rates (except for HELOCs or other programs tied to Prime) but it will make 'short-term money' cheaper for many small companies and/or manufacturers. We'll see what happens! Here's Bernanke's latest testimony to congress.
Posted by Bo Wagner at 10:09 AM No comments: