Suddenly everyone is an optimist! Don't get me wrong, I am truly hopeful that our economy is out of the dumps. As you already know from my emails and blogs, I have always been a huge cheerleader for our economy. We have seen so many reports that match Ben Bernanke's earlier predictions for a 3rd or 4th quarter recovery. On Tuesday we heard that metro ATL home prices increased in June, gaining ground for the 1st time in 25 months! The downside is that prices are still down 14% from 2008 and over 20% from the peak in 2007. The National Association of Realtors paints a rosy picture as well showing July sales rising 7.2%, beating estimates. Likewise new home sales were up 9.6%. So the monster that caused this recession (housing!) may be growing weak.
So why am I nervous? Well, those first-time buyer credits expire in December. Realistically (with all the issues related to getting credit approved and appraised values) you need to be under contract in early October to close by the end of November. What will happen when those credit expire? Likewise, unemployment may top 11% in Georgia per local reports--figures show unemployment rose in 26 states and fell in 17. Finally, what if the government stops spending (or if investors stop buying our bonds)? One word: Inflation. We are definitely in a better position right now, but we're not out of the woods yet. Drive past local strip malls and you'll see a lot of "For Lease" signs. While single-family housing is picking up, commercial properties (and their loans) may be the next problem facing our economy. I may not have b een excited about economics while sitting in my college classes, but I can certainly now say that economics are no longer boring!
Posted by Bo Wagner at 4:54 PM No comments:

My dinner with Ben

"So a few weeks ago I had dinner with Ben Bernanke..."

Let that sink in for a moment... Damn, doesn't that sound cool? You'd think I was really tuned in to our # 1 economist and one of the top 5 most powerful men in our National Government. Well, it sounds cool AND it actually is true, but it's not as it sounds. The key is exploring the "with" in my first statement!

I recently took Susie to Puerto Rico for her birthday (a flight/hotel deal online was too good to pass up!) and chose a nice restaurant to celebrate on a Sunday night. We were told that we could not have reservations until well after 8pm, so we chose to pack up and go for the old-timer's early bird special (translation--we took a 6:30pm reservation). We were perplexed to find that the restaurant was virtually empty (I think there were 1 or 2 couples there). They had 2 large tables set up for what turned out to be a wedding party, but there were a ton of servers so they seemed to have coverage for the party AND the rest of the restaurant (remember, I used to work at Houston's and we were definitely a busy restaurant!). In any event we were enjoying our appetizers when the wedding party arrived, all aglow and happy and everyone took their places and the servers took orders, etc. As I was facing them, I couldn't help but glance over there from time to time, despite how fabulous Susie looked (see?). 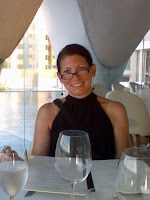 I finally noticed that one person in particular looked familiar. I told Susie that I thought it was Ben Bernanke. She couldn't really turn around as they would notice (you can see the table over her shoulder) but I was really convinced it was him! (as a sidebar, this tells you what a geek I am, as some famous football/baseball/basketball, etc. player could have been sitting right next to me and I wouldn't have known, but Big Ben is on my radar!). I asked our server; he said he didn't know but there were "men in the bar" with him, so then we knew! (He later confirmed that it was him). We later figured out that the restaurant was probably told not to allow anyone else to be seated around the time their dinner party arrived, because they all came in around the time that we wanted reservations. When we left, we saw that there were several casually dressed Secret Service (our guess) agents in the bar--imagine how many were around that we didn't see? I will say that is something our government DOES do well; kudos to the big guys with their radio earpieces! 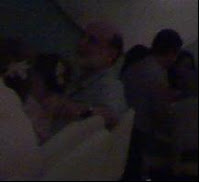 I risked my life to bring you this (horrid) cell phone photo (good luck making him out as the light was poor!). In all honesty I really wanted to say hi, get an autograph, etc. but I couldn't bring myself to do it (irrespective of the armed men in the bar) as it was someones wedding party and it was "their" night--not my time to interrupt the festivities to shake Big Ben's hand... Maybe I'll get a chance someday!
Posted by Bo Wagner at 2:18 PM No comments:

2 Headlines to chew on

"Peach State great for retirees" and "Match.com: Atlanta among least expensive cities for a date". As for the retirees, evidently we have a lot of good tax breaks for Seniors and no inheritance tax. As for the dating set, while ATL is #11 out of 25 surveyed, our 'real level' should be higher as the top city was Pittsburgh, followed by Detroit. Indianapolis and St. Louis were also ranked higher than ATL. Then again, you'd have to move there, so balance the equities on that one... This was based on the price of a 'casual dinner' and two movie tickets. So get out there and see a movie tonight :) Cheers, Bo
Posted by Bo Wagner at 4:21 PM No comments: